La Rioja: An experience of "persecution for living the Gospel"

Bishop Enrique Angelelli,
priests Carlos Murias and Gabriel Longueville ofm,
and layman Wenceslao Pedernera
-- Argentinean martyrs who were killed during the
dictatorship in the summer of 1976 --
will be beatified on Saturday, 27 April 2019,
in La Rioja, where Msgr. Angelelli served as Bishop.
Click here to read about the Martyrs of La Rioja.
The Religious of the Sacred Heart in Argentina-Uruguay have had the privilege of having two communities in La Rioja during Monseñor Angelelli’s time: Famatina and Malanzán.
Marisa Sacerdote rscj shares from those times: 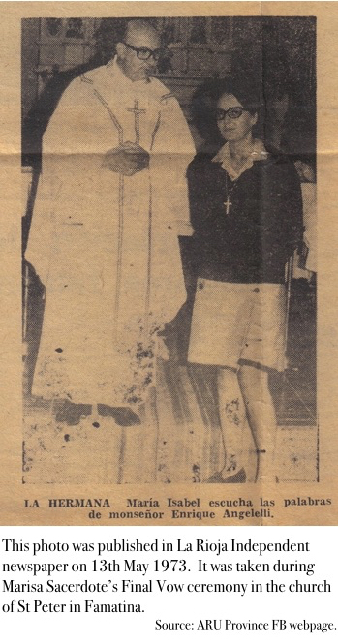 I was living in La Rioja from March 1971 till February, 1977 -- three years in Famatina and three in Malanzán. I was given the task of starting up both communities.

The life of the church was vitally important in both places. We thought nothing of travelling 300km for the monthly deanery meetings, and for periodic meetings for religious and diocesan personnel. Sharing with the clergy, and visits from the bishop were normal and regular. We lived a truly coresponsible life in the church, not only taking our part in carrying out the pastoral tasks, but also in planning and taking decisions. (Today we would call that "shared leadership" or "circular church.")

Taking into account that these were my first steps in insertion, post-Vatican II, I think I can say that we were creating our own religious life -- using as our parameters the Gospel and the five wonderful options of the 1970 General Chapter. The Society and the Church were in crisis. The country was being scorched. At the same time there was an enormous amount of personal and communal responsibility and creativity.

A specific example: I remember that during those years we lived in constant tension between the commitment to the people and the church in La Rioja, and the commitment to our ARU province… We had to discover the balance as we went along. We had a wonderful teacher in Monseñor Angelelli who had great respect for the consecrated life. Equally so, both the provincial and Mother General with her team guided and helped us enormously.

Towards the end of my time in La Rioja, the experience of martyrdom marked my life and spirituality forever. After the two priests, Carlos Murias and Gabriel Longeville were assassinated in Charnical, it fell to me to stay for two weeks with the Josefina sisters to accompany them, while Monseñor Angelelli looked after the parish. They were days filled with a lot of prayer and reflection, suffering, expecting the worst, preparing ourselves for death....

Finally on August 4th, Jesus chose the bishop to give his life for his people. The experience of persecution for living the Gospel and accepting the consequences was very, very strong. And the absence of the Pastor broke my heart and strengthened my convictions.

From the FB webpage of the Province of Argentina-Uruguay.​
Translated and reposted with permission.
Province:
Argentina/Uruguay
Our Spirituality:
Reflections from Around the World
JPIC:
Transforming Relationships