It was noon when we arrived at the RSCJ community at 120th Street in NYC where Sheila Smith, Kathy Conan, Lydia Cho, Stephanie Veluz, and Helen O’Regan warmly welcomed us in their newly opened house. After a delicious meal, we visited the Tenement Museum built on Manhattan’s Lower East Side in 1863. In the theater of the museum, we watched the original film An American Story. Following that, we joined the guided tour of the restored apartments that were home for many working class immigrants in the 19th and 20th centuries. The museum helped us understand the history of immigration in those days through the personal experiences of several immigrant families.

Our second day in NYC began with Cecile Meijer's (USC) presentation on “DPI (Department of Public Information) and ECOSOC (United Nations Economic and Social Council) status” in relation to the whole structure of UN system. Cecile’s presentation prepared us to ponder how we could relate ourselves to the various issues we would hear during the Commission on the Status of Women. We learned that with our incarnational spirituality, which is to discover and reveal God’s love, we are committed to look at the wounded world with respect, tolerance, and peace. This is the way we approach various issues around the world to help people live dignified lives. We also learned that this is where our charism and the purposes of the UN converge.

We began Tuesday, our third day in NYC, with a prayer led by Sheila Smith (USC), who guided us to reflect upon the connection between our charism and JPIC ministry. We were supposed to join the UN Commission on the Status of Women on Tuesday and Wednesday, but all the Tuesday events were cancelled due to heavy snow. However, thanks to the cancellation, we had very meaningful and educational discussions that helped us relate to the status of women in the world we would learn from our visit to the UN on Wednesday. In the morning, we watched a film titled Pray the Devil Back to Hell, which chronicles social unrest in the West African Republic of Liberia where civil war has torn the nation apart and left hundreds of thousands dead or displaced. The film reconstructs the way this tragedy galvanized a coalition of Christian and Muslim women to rise up and put pressure on their government to pursue peace talks through nonviolent tactics. We were struck by their grassroots-movement as it led to democratic elections and Liberia’s first female president. Those ordinary and unarmed women brought civil war to an end, disarmed the rebels, and swept the dictator from power. In the afternoon, Sheila shared with us her research on human trafficking of indigenous people in Canada. The stories of the survivors of human trafficking were very powerful. In particular, Sheila’s story about a survivor who became her Goddaughter deepened our understanding of the relationship between our prayer and ministry. It was helpful to watch the movie together, engage with Sheila’s presentation, and learn the importance of paying attention to the sufferings and hopes around the world.

On Wednesday, we were finally able to attend the UN Commission on the Status of Women! Each of us chose two or three events that she found attractive and shared information with each other at the end of the day.

Besides the events in the Commission on the Status of Women, NYC gave the Novitiate community many beautiful memories. Above all, we will not forget our night visit to the Convent of the Sacred Heart and all those beautiful meals and inspirational stories that the RSCJs at the 120th Street Community and the 10th Avenue Community shared with us. We sincerely appreciate the warmest hospitality of the NYC communities and cherish our time in NYC in which we truly felt we RSCJs are one heart and one mind in Christ. 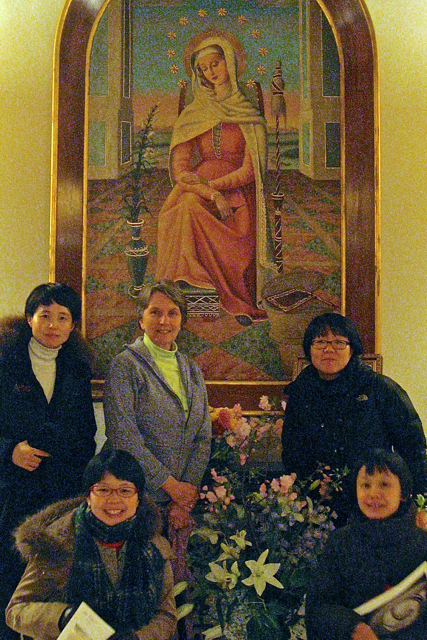 The four novices with Kathy Conan, in front of a painting of Mater Admirabilis