In the morning of New Year's Day, some RSCJ from
the Probation and Mother House Communities joined the
March for Peace: "Peace in Every Land 2019"
organised by the Sant’Egidio Community in Rome.
We arrived at Castel Sant'Angelo at about 11 AM in beautiful sunshine.  There were thousands of people assembled, with groups carrying different banners and flags. Some noticeable banners were representing South Sudan, Kivu, Democratic Republic of Congo, and Pakistan. A strikingly large banner, being carried by three men, had the words “Humanitarian Corridor” on it, in large letters, reminding us of the great work being done by the Sant’Egidio Community in war-torn zones.

We were able to hear some of the speakers. One was a young girl representing the hope that young people have for peace. The president of Sant’Egidio Community, Marco Impagliazzo, also spoke to us, urging us to keep on with our peace-making.  [Click here to access Sant'Egidio's coverage of this event.]

We then began our walk towards St. Peter’s Square, accompanied by some musicians, including a bandmembers from Alabama USA, who have taken part in this March before. We had to pass through security to get into the central part of the Square, which was reserved for the marchers. Soon it was time for the Pope to arrive at his window. A great cheer welcomed him. He spoke about this day, January 1, being the World Day for Peace, established 52 years ago……

The pope reflected on the role of “good politics at the service of peace.” He said that peace “is the fruit of a great political project grounded in the mutual responsibility and interdependence of human beings.” It is also “a challenge that demands to be taken up ever anew” --  a challenge that “entails a conversion of heart and soul”.  [Click here to read the full text of the Pope's message for the 52nd World Day of Peace.] 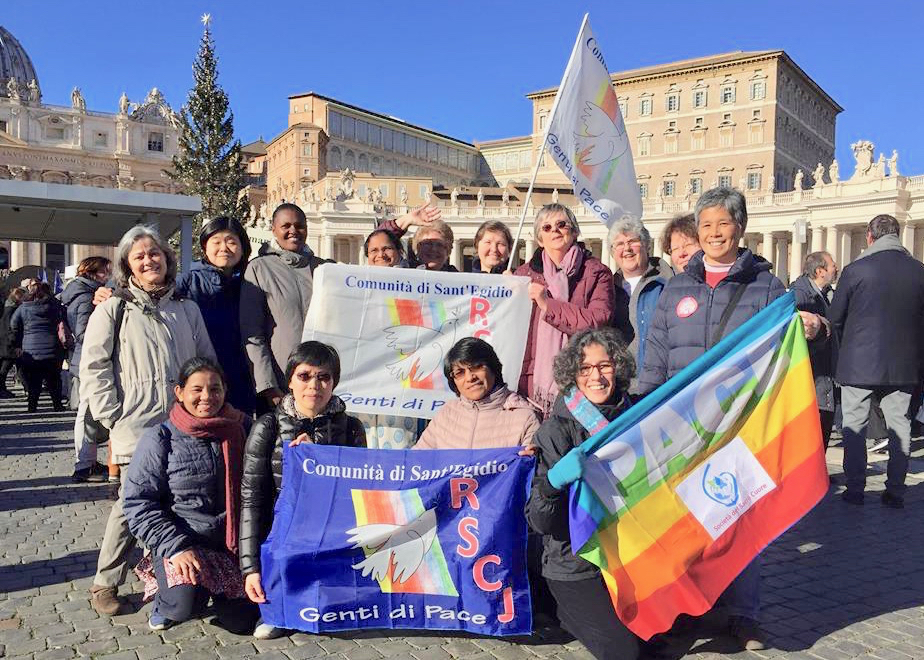