The Margins at the Centre of Australia

Many Australians have a dream of travelling to the centre of our land and to visit Uluru, the great rock that stands at the heart of our continent. This year, inspired by my desire to learn more about the spirituality of our indigenous people and encouraged by the Call of the 2016 General Chapter “to reach new frontiers,” I decided to make my retreat in Alice Springs. There is a small retreat house there called “Campfire in the Heart” run by a married couple, Sue and David Woods, which made it possible to realise my dream.

My journey to Alice Springs took me via Uluru-Kata Tjuta National Park, the traditional land of the Anangu people. In this part of central Australia the indigenous people have not had a history of being completely dislocated from their land as has been the case in the coastal areas. It was the first time I have actually been at the margin where western culture and the ancient aboriginal culture overlap. There are few opportunities for tourists to interact with Anangu people as they have their own closed township, Mutitjulu, away from the tourist area. It is through the cultural centre and the guides that visitors are able to learn. 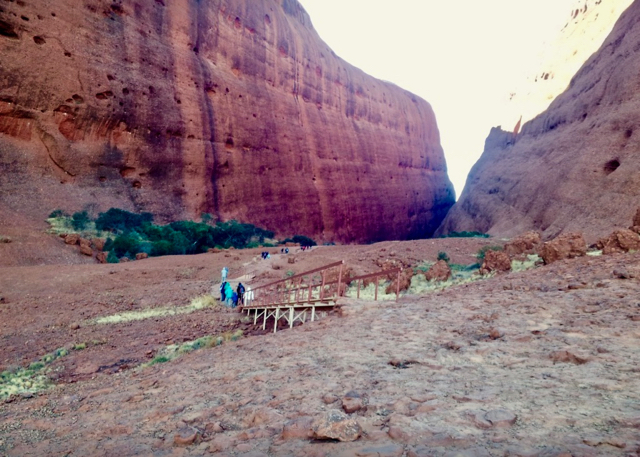 Kata Tjuta, Valley of the Winds
It is a spiritual experience to be up close to this massive rock, to see the sacred sites that we are allowed to view and to hear some of the Dreamtime stories related to them. Some sites around the rock cannot be photographed as they are reserved for “men’s business” or “women’s business” and the road from Uluru to Kata Tjuta (the Olgas) is deliberately curved so the women do not have to look directly at Kata Tjuta, a place for men’s ceremonies. The Anangu people do not have the same sense of time as we do; the Dreamtime is now and the spirits who created the landscape in which they live are still around.

The six hour bus trip to Alice Springs took me through land that we call semi-arid yet it has sustained the lives of the Arrernte people for thousands of years. They know where and how to find water and edible fruits, and how to hunt animals. Time slows down in the centre and the landscape invites reflection and prayer. Each morning at “Campfire in the Heart” those in residence gather for morning prayer, an Ecumenical gathering reflecting on the readings of the day together. On Wednesdays a wider group gathers around the campfire for the evening meal and discussion. Margie, an Arrernte elder, shared part of her life story on the evening I was there. Her early life was in a traditional camp and I was struck by the complexity of relationships and the time and energy that was spent making sure that, as Margie put it, “everything was straight” in them. 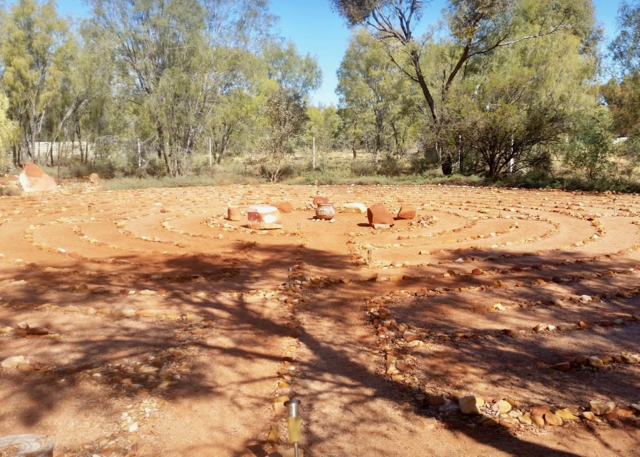 The Labyrinth at "Campfire in the Heart"

On Sunday I was able to attend the Aboriginal Mass with David Woods and Margie. Here, some of the responses are now said in the Arrernte language. They are projected up on the screen with the English below. While the Bible has been very recently translated into the Arrernte language it is not being used in Mass, yet. The people speak the language but not many are familiar enough with it in the written form to be able to be readers at Mass.

My retreat at the heart of our land surely was “a new frontier” for me. I returned with a much deeper understanding of the huge chasm that lies between our western way of viewing the world and that of “the oldest living culture” on the planet.

Spiritual Reflections
Province:
Australia/New Zealand
Our Spirituality:
Reflections from Around the World