"My stay in this country has been short and very intense, but I would like to thank God and all of you for the opportunity to visit this country which Saint Francis Xavier so greatly desired to know, and where so many martyrs bore witness to their Christian faith.... I would also observe that, for all the efficiency and order that mark Japanese society, I have sensed a yearning, too, for something greater: a profound desire to create an ever more humane, more compassionate, more merciful society."
Pope Francis
Message at Sophia University

Pope Francis visited Japan from 23rd to 26th November 2019.  It has been a very special moment for this non-Christian country and here are some highlights.

Nagasaki and Hiroshima
"Dear brothers and sisters,
This place makes us deeply aware of the pain and horror that we human beings are capable of inflicting upon one another."

Message at the Atomic Bomb Hypocenter Park
Video of the Visit to Nagasaki
In his message, Pope Francis did not mention any specific country or government. Indeed, we know well the history behind Nagasaki. As RSCJ in Japan, we were encouraged to look at this history not only from the perspective of Japan, but more as the cry of humanity and the call to work towards peace for all.
~ Chihiro Yamamoto rscj
It is my humble desire to be the voice of the voiceless, who witness with concern and anguish the growing tensions of our own time... With deep conviction I wish once more to declare that the use of atomic energy for purposes of war is today, more than ever, a crime not only against the dignity of human beings but against any possible future for our common home.

Message at the Meeting for Peace
Video of the Visit to Hiroshima
I was so moved by his very striking and sincere words, and I felt solidarity with those whose voices need to be heard. His clear and strong message has been widely reported across the whole country, which is quite encouraging to those who work for peace.

Meeting with victims of the triple disaster in Northeast Japan in March 2011
In Tokyo, on November 25th, Pope Francis met with victims of the March 2011 triple disaster in Eastern Japan, as well as with persons and groups supporting them. There were about 300 people who participated in the meeting. It was a day of great joy and gratitude because many of our friends from Minamisoma could attend and listen to the encouraging words of Pope Francis: “...there is also the immense challenge of restoring the fabric of society. Until social bonds in local communities are re-established, and people can once more enjoy safe and stable lives, the Fukushima accident will not be fully resolved.”
~ Masako Egawa rscj
Message at the Meeting with Victims of the Triple Disaster
Video of the Meeting at Bellesalle Hansomon in Tokyo
Message to the young people at Tokyo Cathedral as well as Sophia University 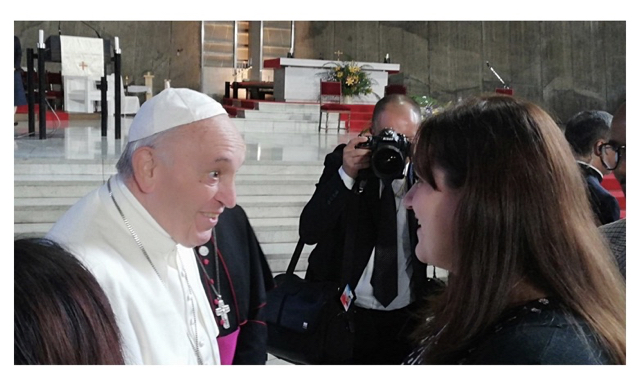 The schedule was extremely tight, but Pope Francis talked to young people with very simple and powerful messages that touched Christians and non-Christians alike. He even asked for a response from the audience with a sense of humour! It was very meaningful that some refugees were invited to the gathering. One of our Syrian friends who is shown in this picture was able to have a conversation with him and asked for the improvement of the desperate situation for Christians in Syria, Egypt and Iraq.
On the final day, Pope Francis made a short visit to the Jesuit community, as well as to Sophia University in Tokyo; and this was quite moving. His warmth and sincerity left a deep impression on the students who are mostly non-Christians.
Message at Sophia University
Video of the Visit to Sophia University
Wherever he visited, the Holy Father left a deep impression because of his attentiveness and his love and care for people, particularly those who are marginalised. We are very grateful to him for his visit that enkindled in us the fire of our mission to make known God's love through our daily life and relationships.
~ Yukiko Aoki rscj
Section:
International News
Province:
Japan