Journey to the centre of Sophie's heart

"Between the banks of the Yonne and the hillsides of Burgundy,
at the entrance to the Ile-de-France,
the Sophie Barat Centre offers retreats
and various ways of resting on your spiritual journey,
and lets you into the house
where the foundress of the Society was born."

I was happy and full of anticipation the day in July when I visited Joigny in the area of Burgundy in France. The warm summer enticed me to make my way through little towns and villages, confirming for me that beautiful France is much more than just Paris. I could have chosen to go somewhere else, but one early February morning something stirred my heart and, urged by that inner voice, I decided to make this journey.
I was deeply moved to get to know the house where Saint Madeleine Sophie was born and brought up. For some time I had been reading about who she was, her ideas and principles. Nonetheless, to connect with Sophie – as she liked to be called – you have to go to Joigny and allow yourself to be transported to another dimension where time doesn’t exist.
For months Sophie and I had been having a variety of conversations. I loved the idea of going to France already informed in order to ask deeper questions. Once there though,  the plans for depth were placed to one side and for a few days I left aside the doubts, questions and so much thinking. It was only my heart that was seeing, feeling, and experiencing with all my senses what had taken place there.
Meeting Sophie
A tiny street of typical village houses steeped in history led me to the Centre Sophie Barat. It is a place where you can make either a guided or a private retreat, in an atmosphere of silence. It is the house where Sophie was born, a space for reflection, a place of pilgrimage with a functioning museum that allows you to touch the physical, artistic, cultural and social surroundings of the village where this holy woman was brought up. 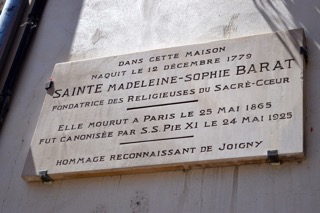 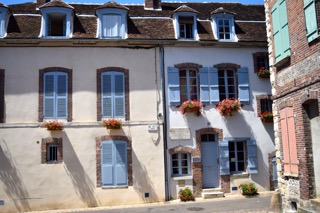 Photos by Mariely Rivera-Hernández
Sitting by a low wall I looked with interest at the house with blue windows and doors, adorned with hanging baskets filled with peach coloured flowers. I was waiting for the clock to strike two, but I rang the bell at ten to two and to my surprise Chantal, Ysabel and Ana Maria were there, waiting for me. Three very special religious of the Society of the Sacred Heart. Language barriers disappeared as they spoke Spanish and English, as well as French. They welcomed me with great affection. I felt like a little girl coming to visit a family she has known all her life. But the fact is that until that moment I had never met them.
I was very grateful for each little detail …from the afternoon tea we enjoyed happily together, to the visit around, with all the attendant anecdotes. Telling a story like that has the effect of transporting you as if in a time machine, and you can almost see the people dressed in the style of the times, you hear the everyday sounds and noises of that time, you feel the temperature change from hot to cold and vice-versa, you can smell the wood and the hay as you become immersed in the imagined  bricks and mortar of that time and place.
The most touching moment was when I imagined Sophie running up and down the staircase and I saw her in my mind going to the windows, looking at what was going on, listening to the people speaking. I really understood then why in her writings she insists on the importance of the imagination.
Little by little the contagious passion of the sisters was revealed. At one point I was drawn back in my mind to Puerto Rico and could hear again the wise conversations of Sisters Madeline, Mari Clemen and Socorro. I could also hear the energy in their voices when repeating the part of the 2006 letter from the General Council of the Society of the Sacred Heart which says: "to educate is in itself an act of justice.”
I reflected for a moment and thought that Sophie had indeed realised many of her desires. First, reaching people, leading their hearts to the God of Love revealed in the Sacred Heart, and second, inspiring them through education.
Empowering through education
I have been studying the idea of empowerment for years, and with such an amount of theory and methodology I needed to find something more concrete, for example, to understand Sophie’s story, to find out that in fact she was the first to have begun digging the furrow that has spread out from Joigny. 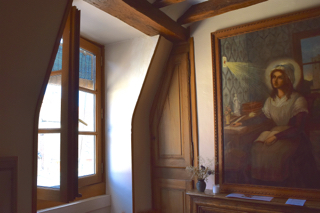 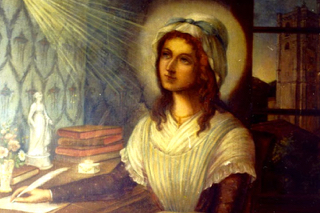 Sophie's room in Joigny                                      Detail of the portrait of Sophie
(photo by Mariely)                                                  (rscjinternational file)
Empowering  is an act of changing, transforming to new ways of thinking and acting.
Sophie’s empowering begins with drawing close to a God where sacrifice and fear is transformed into love and hope. She was a very gifted woman, understanding that in order to embrace change, in line with the transformation resulting from the French Revolution, it is crucial to put in place the support given by education.
At the tender age of thirteen years she learned that education was the key to awakening awareness and focussing her mission on something concrete.  Education was a vehicle of change in educating families and communities with different visions, that would unite the uncertainties of the cultural, political and social upheaval of that moment in Europe.
She focused on women, although the Revolution affected the lives of men, women, the elderly and the young. Nonetheless Sophie was convinced about emphasising the power of the feminine to advance the development of the family and the community. In other words, she knew that women were the ones to effect transformation through learning. Sophie supported the will to create educative situations for women and to contemplate the spirit of a God of Love.
Thus it was: Sophie’s empowering was rooted in the change of spiritual perspective to a God of Love, realised in human terms through the education of women. In effect, through this means, she brought about a multiplier dimension to the educating of children and young people.
Connections with Universidad del Sagrado Corazón and Puerto Rico
Our University bears the name of the Sacred Heart and Saint Madeleine Sophie Barat is our keystone. So we bear within us the building blocks of Sophie’s empowering. 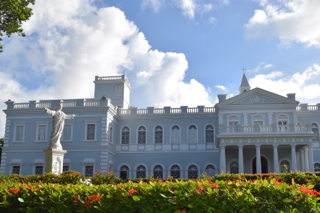 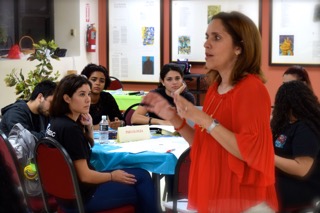 Universidad del Sagrado Corazón                       Mariely with groups of university students
Puerto Rico is living in difficult times and in need of internal change. We know from history that the only constant is change. I have thought about France during the Revolution, because from there rose a movement of social change that changed the whole world. Time has passed, and the French people have continued adapting to change, sometimes correctly, sometimes not, but they have reinvented themselves. Similarly, Puerto Rico, within its own context, is living in a time of enormous challenges, not so much for lack of technology, but more because of an absence of ideology for some, and of identity for others.
This asks us to consider a variety of matters, among them education and the young. Specifically we are concerned with higher education, something about which many have an opinion but few study the matter in depth.  These are challenging times on many fronts, among which are the demographics of a rapidly aging population. At the same time the diaspora is widening due to the rise in those leaving to settle abroad.
I have asked myself, what would Sophie have to say about Puerto Rico?  Instinct tells me she would call us to reinvent ourselves and dare to try to do things differently.
Universities have no other option but to undertake and offer innovative experiences to changing segments of the population. The Sagrado is at a crossroads: we either find the way forward or we stagnate. So, just as Sophie at the age of 22 was filled with courage and had the vision of founding the Society of the Sacred Heart, which currently is present in more than 40 countries, this has to happen in Sagrado. The challenge lies in viewing these changes as opportunities, allowing ideas that have brought about good results to flourish, and creating new spaces for critical social thought, permitting other reality-based ideas to grow and develop.
The bridge from Joigny to Santurce is the will, with its breadth, courage, optimism and faith, among many other attributes.
We have to renew these connections, as well as the conversations that go beyond the confines of Puerto Rico and allow us to dialogue with several of the Chapters of the Congregation. We have connections, as well as common points of genuine concern, such as education and the young.  Here, I mean youth that is assessed not only by age; since being young is an attitude and a spirit.
Reflection in silence
I had never before seen gardens with roses, lilies, daisies, lavender and more. Every corner of those gardens connected me to the hallmark that Sophie left on her work – the willingness, the optimism, the sensitivity. It was a mythic meeting of wisdom, beauty and the spirit of wellbeing.  Walking among the flowers brought me once more to a meeting with that Sophie who was firm but compassionate, an inspiring leader who drew from the Heart of Jesus, filled with resilience gained from the lessons she had learned. 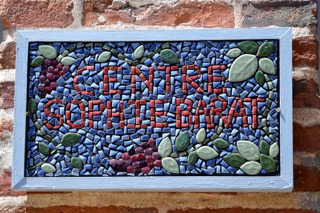 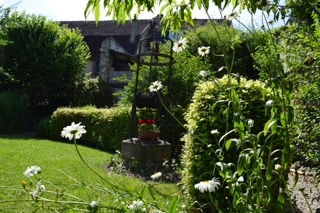 Photos by Mariely Rivera-Hernández
Education was and will continue to be her means of sowing change from the gardens of the Sophie Barat Centre to other gardens such as those we have in Sagrado.
I returned from there having allowed myself to be enchanted in Sophie’s house. I left there strenghtened by love, by the exquisite beauty, and with so many discoveries.
I made my way through the little town of Joigny to walk among the vines, seeing the enchanting bridge with its multi-coloured hues changing depending on the different vantage points on the walk. This is why I said that France is more than just Paris; rightly, Van Gogh, Renoir and Monet among other great artists have left a precious impressionist heritage inspired by the beauteous nature of this great European country. 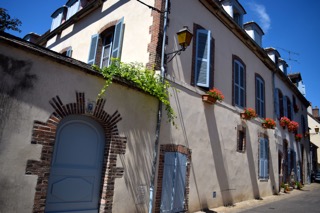 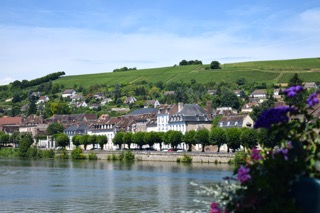 Photos by Mariely Rivera-Hernández
I walked to the end of 11 Rue Davier and looked back. I gazed intently at the house with the blue windows and the traces of clouds in the sky.
I looked at the kind people in the silence of the rural and the urban. I left with my old backpack filled with light. I left a little bit of my heart in Joigny with the hope of connecting from my corner of the Caribbean.
I continued walking in silence, breathing in the odour of holy ground, I took photos and said farewell to the centre of the heart of Sophie. Now hers beats within me.
Mariely Rivera-Hernández
Universidad del Sagrado Corazón
Puerto Rico

Mariely Rivera-Hernández is Vice President for Student Excellence at the Universidad del Sagrado Corazón in Puerto Rico.  During her twenty years of experience in various projects, she has been faithful to her commitment to be an agent of change in the service of excellence and of justice through education.  Her participation in the educative mission of the Sacred Heart has as its objective making known and spreading the influence of the educative project of St. Madeleine Sophie Barat among adults and youth.

Province:
Belgium/France/Netherlands
Antilles
Our Spirituality:
Reflections from Around the World
Living Our Mission:
Education through Schools