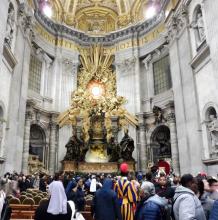 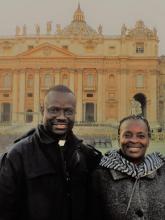 Left:  Photo taken during the prayer vigil inside St. Peter's.
Right:  Marie Jeanne with Abbé Théo from the diocese of Kisantu.
On their way out, Marie Jeanne and Anne said a prayer to St Madeleine Sophie who had witnessed the vigil from her well-known position high on the wall of St Peter’s. She would know the needs and concerns expressed in this vigil and is surely with our sisters.
Anne Corry rscj
International JPIC Coordinator
Section:
Praying with the World
International News
Province:
Democratic Republic of Congo
Mother House
JPIC:
JPIC News and Updates